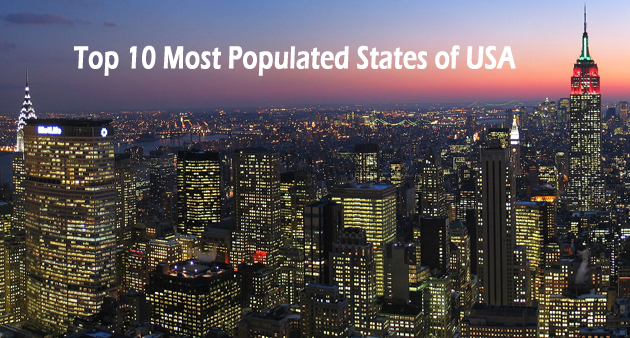 The United States of America is a collaboration of 50 states. One of the economic hub of the world, everyone dream of paying at least a onetime visit to this land of Americans. We have impressions made of this land through various sitcoms and movies from Hollywood. But, reality is far different from what is shown in the show businesses. Let us keep this discussion for some other day.

Today, we have gathered some recent surveys and reports about the population of this country. In the article below you will find the top 10 most populated states of America.

“Eureka, I have found it”! The Hollywood state of California is the most populated state in the United States of America. This Golden state is all about the glitz and glamour of Hollywood. It is rich mixture of class and culture. Another description we get from its state song whose initials goes as, ““I love you, California, you’re the greatest state of all; I love you in the winter, summer, spring, and in the fall…”

The Lone star state or Texas is known for its friendly citizens. It is the second most populated state in America. It is said that the economy of the whole USA will collapse if Texas is taken out of the equation. Such is the power of this state.

“Texas, Our Texas! all hail the mighty State!; Texas, Our Texas! so wonderful so great!; Boldest and grandest, withstanding ev’ry test; O Empire wide and glorious, you stand supremely blest.”

The most happening state of the world, New York also hosts a lot of population in the country. The Empire State is a complete package of museums and gallerias. Home to the Mighty Yankees, they never stop singing, “There isn’t another like it, no matter where you go…” The Lady Liberty welcomes all and makes everyone fall in love with the state.

The Sunshine State of Florida is at number 4 in the list. The country is dependent on agriculture and tourism. People from all around the world come here to seek employment. With Gulf of Mexico on the border, they go by the motto, “In God We Trust”. Land of Universal studios and Disney World, they sing “When will I see de bees a-humming; all round de comb?…”

Illinois witnessed a sudden rise in terms of its population count. This Prairie State has an agricultural based economy. With capital Springfield, this state is known as the miniature copy of the whole of US. They stand by the motto, “State Sovereignty, National Union” and sing “By thy rivers gently flowing, Illinois, Illinois, o’er thy prairies verdant growing, Illinois, Illinois…”

Pennsylvania or the Keystone state is another most popular state in the USA. People of this country believe in “Virtue, Liberty, and Independence” Their economy is based on dairy products, cattle rearing, hogs, hay, mushrooms etc and also tourism, electronics production, machinery and others. People of the states represents Pennsylvania as,” “Pennsylvania, Pennsylvania, blessed by God’s own hand…”

Ohio is one of the most popular and famous states in the United States with beautiful hills and valleys in its vicinity. The O in Ohio comes from its nickname Buckeys State. With Columbus as the capital, they mostly deal in manufacturing cars, steels, plastics, chemicals etc. People are caught singing “Beautiful Ohio, where the golden grain; dwarf the lovely flowers in the summer rain…” in the state. They believe that, “With God, All Things Are Possible.”

Georgia is another most populated state of America. Nicknamed as the Peach state, it is also known as the Empire of the South. The state enjoys an agriculture based economy with industries like Poultry and eggs, peanuts, cattle, hogs, dairy products etc. “Georgia, the whole day through; just an old sweet song keeps Georgia on my mind…” sings the Georgians. Their motto is Wisdom, justice, and moderation.

This Wolverine state is located in the mid-western part of the country. It is surrounded by big five lakes, hence is the name Great Lake State attached to it. “The whisper of the forest tree; the thunder of the inland sea…” is what the state sings about. Michigan also hosts Detroit, the car capital of the world in its state. They go by the motto “If you seek a pleasant peninsula, look about you”.

”In my mind I’m goin’ to Carolina…” Known as the Old North State or the Tar Heel State, North Carolina is located in the South East of the US. The scenic beauty and charm of this state is what its citizens boost of. Economy is diversified from farming to engineering, biotechnology and finance based industry. They go by the motto “Esse Quam Videri” (To Be Rather Than to Seem)