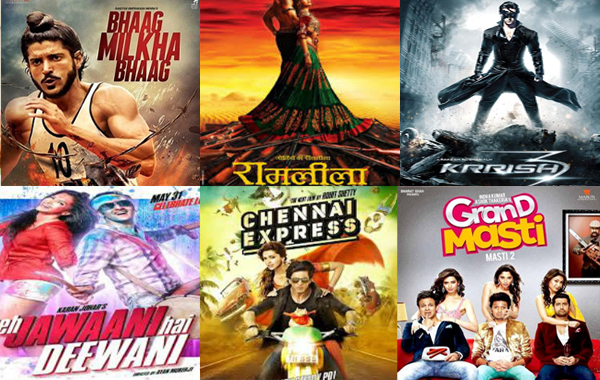 2013 is a special year in the history of Bollywood as Indian cinema successfully completed 100 years of survival. The year was a package of all genres with movies like Chennai Express, Krrish 3, Aatma, Ram Leela, Grand Masti, Special Chabbis, Gori Tere Pyaar Mein and so on. Some them broke most records at the box office, while some did not fair much and were declared flop.

Here is the list of the top 10 Highest Grossing Bollywood Movies in 2013 that made a strong box office collection.

Chennai Express is a romantic action-comedy featuring Shahrukh Khan and Deepika Padukone in lead roles. The plot is about the protagonist’s journey from Mumbai to Rameshwaram and the interesting turn of events during his journey. The movie could bag 208.69 Crore at the box office by breaking of the earlier records.

Yeh Jawaani Hai Deewani is a coming-of-age romantic comedy film with Ranbir Kapoor and Deepika Padukone in lead roles. Directed by Ayan Mukerji, this movie could gross 185.83 Crore in the box office. The songs from the movie became an instant hit too.

Krrish 3 the sequel from Koi Mil Gaya and Krissh makes an extraordinary impact on at the box office too. It appealed to the adult and children alike. This superhero movie with Hrithik Roshan on the lead could grab 180.37 Crore at the box office and the count is still on.

Goliyon Ki Raasleela, Ram-Leela is the desi version of Romeo Juliet directed by Sanjay Leela Bhansali. Filmed in Gujarat about the enmity of two Gujarati community, the movies could bag 109.39 Crore at the box office.

Bhaag Milkha Bhaag is a biographical sports drama based on the life of ‘The Flying Sikh’ Milkha Singh. Farhan Akhtar could keep the audience stick to their seat throughout the movie. Grossing 108.87 Crore at the box office, the movie could gain a lot of positive review from the critics.

Race 2 is an action thriller directed by Abbas-Mustan. This sequel of the 2008 hit Race bagged mixed review. Some said the plot was almost similar to the prequel Race while some loved the treatment. Whatsoever, the film made a whopping box office collection of 96.34 Crore.

Grand Masti, the sequel to Masti 2004 is directed by Indra Kumar. This Bollywood adult comedy by Vivek Oberoi, Aftab Shivdasani and Ritesh Deshmukh in the lead also got mixed review. But the film could gross 92.13 Crore in the box office.

Aashiqui 2 inspired from the musical film ‘A Star Is Born’ is a romantic musical drama film directed by Mohit Suri with Aditya Roy Kapoor and Shraddha Kapoor in the lead roles. This love story centering on the turbulent relationship between the lead musicians could bag 78.42 Crore in the box office.

Special 26 or Special Chabbis is a thriller heist film directed by Neeraj Pandey. The film is inspired from a real life event about the income tax raid on the Opera House branch of Tribhovandas Bhimji Zaveri in Mumbai. The movie was well acclaimed by the critics and could bag an impressive 66.8 Crore at the box office.

Satyagraha is a Hindi political drama film directed by Prakash Jha based on the philosophy and practice of Mahatma Gandhi’s ‘Satyagraha’. The movie was loved by majority of the audience but came with inconsistent reviews from the critics. This movie could make 61.92 Crore at the box office.