The Southern part of India like Tamil Nadu, Kerala, Andhra Pradesh and Karnataka are mostly famous for their logic-defying movie stunts and breathtaking temples. Temples are the worshipping place of the Hindus where they feel the presence of the almighty. Apart from being architectural marvels, temples have a unique and divine aura which has kept the faith alive in people for centuries. The oldest standing temples date back up to the 3rd and 5th centuries. As the Hindu religion consists of over thousand Gods, there are numerous temples occupying each corner of India. Tamil Nadu itself has a total of 34,000 temples. It is believed that even a single minute inside any temple is enough to cleanse your soul. Today, let’s read something divine. Here is the list of the ten marvelous Holy Indian Temples of the Southern region. 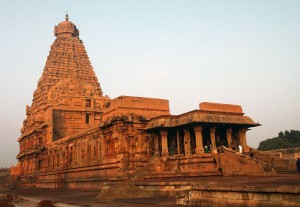 Brihadeeswarar Temple is situated at the heart of a temple town in Tamil Nadu, Thanjavur (Tanjore). It is considered as the Big Temple of the UNESCO World Heritage Site. It was built over 1000 years by the Chola King, Raja Raja Chola I using granites. It is dedicated to Lord Brihadeeswarar, a form of Lord Shiva. The vimana or the tower is one of the tallest in the world.  The temple has fortified walls around it which is rumoured to have been built in the 16th century. 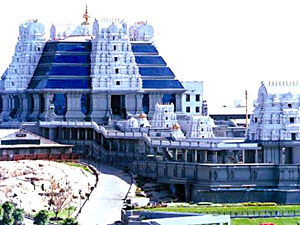 The International Society for Krishna Consciousness (ISKCON) was established by Abhay Caranarvinda Bhaktivedanta Swami also known as Srila Prabhupada. The ISCKON temple in Nampally Hyderabad is very popular and is the headquarters of ISCKON in South India. This magnificent temple is always crowded with devotees where Lord Krishna, the avatar of Lord Vishnu is worshipped. Other deities of this temple are Sri Gaura-Nitai, Sri Jagannatha Baladeva-Subhadra, and Sri Radha Madana-Mohana. It is one of the most famous ISCKON temples around the world. Bhakti Vrksha also facilitates devotees to get personal attention and guidance on bhakti yoga into sustaining good physical and mental health.

Ramanathaswamy temple is situated in the holy island town of Rameswaram in Tamil Nadu. It is dedicated to Lord Shiva. It is one of the 12 Jyothirlinga temples. Legend has it that Lord Rama, on returning from Sri Lanka after killing the demon Ravana and rescuing his wife Sita, wanted to pray to Lord Shiva to ask forgiveness for any sins that he may have committed during the war. The temple was expanded and enhanced by the Pandya Dynasty and The Jaffna Dynasty. This temple has the longest corridor among all temples in India. The temple has two lingams: the Ramalingam and the Vishwalingam. 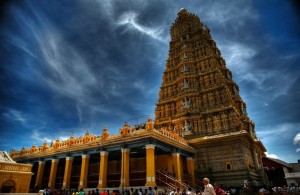 Chamundeshwari Temple  lies atop the beautiful Chamundi Hills in Mysore, Karnataka.  As the name suggests, it is dedicated to the Goddess Chamundeswari, a form of Goddess Shakti. It is one of the most famous temples in South India and the major attraction of the city of Mysore. It was initially built as a small temple by the Hoysala, but with the generous donations of many Mysore Maharajas, it was made bigger and better. It is believed that human and animal sacrifices were made in this temple ages back.  In 1659, a path with a thousand steps was built leading to the temple on top of the hill which is 3000 feet high. Sree Padmanabhaswamy Temple is situated in Thiruvananthapuram, the capital of Kerala where the protector of the Universe, Lord Vishnu is worshipped. It is one of the 108 Divya Desams found all around India. Sree Padmanabhaswamy Temple gave the city of Thiruvananthapuram its name, as the city’s name translates to “the Holy Abode of Anantha Padmanabha”. Inside the shrine lays the idol of Lord Padmanabhaswamy in the Anantha-sayanam posture (in the eternal sleep of Yoganindra on the thousand headed snake Adisesha). The temple’s gopuram is 100 feet high and the temple tank, Padma Theertham, is located nearby too. 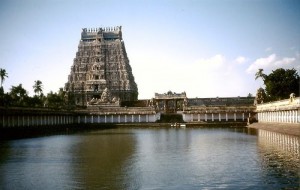 The Thillai Nataraja Temple is situated in the small town called Chidambaram in Tamil Nadu. It is believed that this temple was Lord Shiva’s home on earth.  This place went through a lot of remodeling from various dynasties like the Cholas and the Pallavas. It is said that King Kocengannan Chola was born after his parents prayed passionately to Lord Nataraja and after he grew up, he refined the temple’s structure. Here Lord Shiva is in the form of Lord Nataraja, The God of Dance, in the middle of the Ananda Thandavam (The Dance of Delight). Chidambaram represents aether or akasha, which is the fifth element. 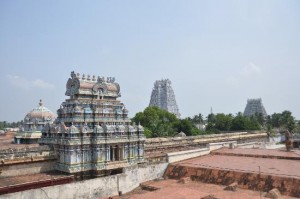 Sri Ranganathaswamy Temple is situated in the village of Sri Rangam located near the city of Thiruchirapalli in Tamil Nadu.  This temple is believed to be the first of the 108 Divya Desams that are dedicated to Lord Vishnu. This temple is the abode of Lord Ranganatha, who is a reclining form of Lord Vishnu. The Sri Rangam temple is considered the largest functioning Hindu Temple in the world as it covers an area of 156 acres. The Rajagopuram is 237 feet high and consists of eleven tiers. Tales narrates that 13,000 vaishnavites died while keeping Malik Kafur’s army away from the temple until the deity could leave city safely. 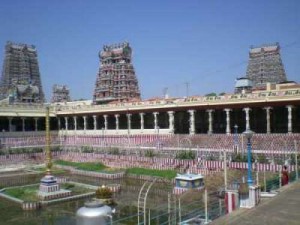 The majestic Meenakshi Amman temple is situated on the banks of the river Vaigai near the temple city of Madurai, Tamil Nadu. The temple is dedicated to Meenakshi Amman, a form of Parvathi and her consort Sundareswarar, a form of Shiva. Interestingly, Meenakshi Amman temple was on the list of top 30 nominees for the New Seven Wonders of the World and generates revenue of more than 60 Million rupees per year. It is believed that, Indra, the Lord of the Devas, built a shrine for the svayambu lingam that he had found while on a pilgrimage to cure his misdeeds. The temple has a hall called Aayiram Kaal Mandapam or “The Hall of Thousand Pillars” with 985 pillars. Each pillar in the hall is a carved monument of the Dravidian sculpture. The Sri Krishna Temple is situated in Guruvayur, Kerala. It is probably one of the most popular temples in the world. Lord Krishna, an avatar of Lord Vishnu is worshipped here. It is one of the most important temples for Hindus in Kerala. It is referred to as Bhooloka Vaikuntam or Vishnu’s heavenly abode on Earth. The idol of Krishna represents the part of Krishna’s story when the 8th newborn son of Vasudeva a–nd Devaki introduces to them that he is no one but Lord Vishnu and will be holding the discus and the conch. 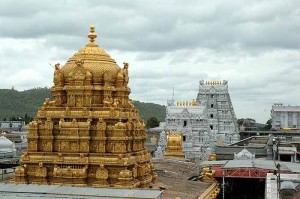 Tirumala Venkateswara Temple is located on the Tirumala hills near Tirupati, Andhra Pradesh and is one of the most sacred temples for vaishnavites. According to legends, Lord Vishnu came down to Earth as Venkateswara to woo back his consort Goddess Lakshmi after a feud. Goddess Lakshmi is present as Padmavathi. The temple is maintained by the Tirumala Tirupati Devasthanam, one of the richest religious bodies in the world. The Lord’s prasadam, a laddu, is famous all over the world. Tirupati has the world’s largest solar powered kitchen. The whole temple and all the houses, offices and other buildings run on solar and wind energy.  More than 75,000 devotees visit the temple every day.