1. The Great Wall of China, Beijing You cannot afford to miss the Great Wall in Beijing if you are in China that was built during the Ming Dynasty (1368-1644). The wall that runs over 373 miles, containing about 827 city wall platforms, 71 passes and countless towers is one of the wonders of the world. The Forbidden City used to be the Chinese imperial palace from the mid-Ming Dynasty to the end of the Qing Dynasty. It served as the home of the Emperor and his household, along with the ceremonial and political center of Chinese government for five long centuries. The city is centrally located in the Beijing city and today houses the Palace Museum. 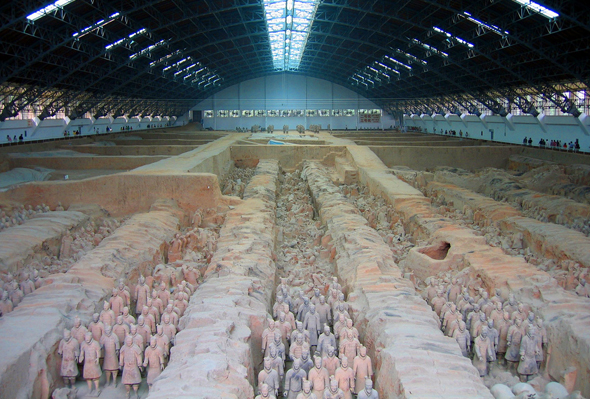 The Terracotta Army is actually a form of funerary art that got buried with the First Emperor of China. The terracotta figures dates back to 210 BC which was recently discovered by local farmers near Xi’an in 1974. It is seen that the figures vary in height (184-197cm / 6ft-6ft 5in), according to their role. The tallest were the Generals. The figures include warriors, chariots, horses, officials, acrobats, strongmen, and musicians of that time. According to estimates the strength of the Terracotta Army was over 8,000 soldiers, 130 chariots with 520 horses and 150 cavalry horses. However, a lot are still buried in the pits.

Tourists are allowed to buy Terracotta Warriors Souvenirs from here. The beauty of Hangzhou is increased tenfold because of West Lake. The lake has an average depth of 5 feet with surrounding hilly peaks on all the three sides. This wonderful water wonderland acts as an imperial retreat of the tourist. The lake and its environs have all the elements of a traditional Chinese garden. The natural setting of strangely shaped peaks, serene forests and springs, dense foliage and a myriad of blossoms especially in springtime are enhanced by a treasury of sculpture and architectural features of the lake.

The best time of the year to visit West Lake is definitely spring and summer where you see lotus blossoming all over the lake. The Bund does not worth a miss in Shanghai. It falls within the former Shanghai International Settlement along the western bank of the Huangpu River, facing Pudong, in the eastern part of Huangpu District. The bund is all about the buildings and wharves on the roadside. Building heights are strictly restricted in the area.

The best time to visit the Bund is early morning before 8 a.m. and late night after 10 p.m. because of the high population density. Do not forget to enjoy the mesmerizing night scene beside the river.

A few other must visit places in China for tourists are Dian Chi Lake (Kunming), Mogao Grottos (the storehouse of Buddhist art), and Yellow Mountain etc. They are rich in natural beauty and culture heritage and hence worth a visit.