Seems like there is a tit-for-tat scenario going on across borders. It all started around India’s Independence Day (August 15th) when Pakistani hackers defaced Indian Eastern Railways and MTNL websites. Indian hackers in retaliation vandalized around 30 Pakistani websites (the exact number is unknown).

Again quite recently, according to hackingly.org, 60 Indian websites have been defaced by a group which calls themselves Bangladeshi Black Hat hackers. The group in a Facebook post mentioned that they are declaring war against the Indian Government, especially in the protest against Border Security Forces.

Below is the press release BBHH put up on their Facebook Timeline:

“Most of the websites that we visited from the list seem to have been restored, but the defaced page is still showing up on number of websites. 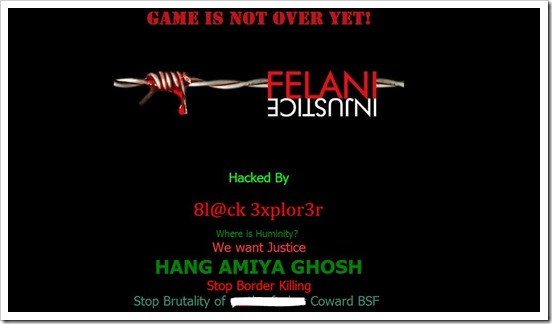 From what we can say, most of the websites that were hacked were based on WordPress platform, and security updates may not have been done on them. BBHH seem to have taken advantage of these known security holes and were able to gain access to deface them.”

A major question that has been arising among business owners is how do they secure their website now? Most importantly update the software or CMS that the website uses for any security holes that have been found. Ask your web hosting provider or webmaster to run a security audit. Note that most of the websites get defaced because they run of out-dated versions on CMS which have known security holes!