Talk about the human erogenous zones, different schools of thought is seen to be offering different opinion. A few are of the opinion that women may have dozens of ‘hot spots’ all over their body whereas men have only one i.e. the genitals. But, according to a recent revealing, men and women might have almost the same number of erogenous zones. 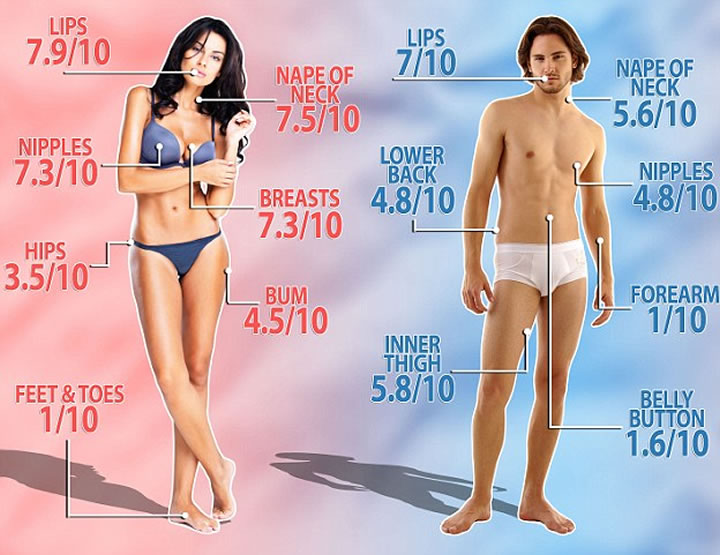 Many believe that the feet should probably be an erogenous zone, due to their nerve receptors’ proximity to those of the genitals. Well, new research finding proves this point.

A recent study was conducted in the United Kingdom and Sub-Saharan Africa where 800 individuals were asked to rate 41 different body parts for erogenous intensity. To the researchers’ surprise, a beautiful correlation of intensity, regardless of age, sexual orientation, nationality, and race and the sex of the participants were seen. This “across-the-board” consensus for erogenous zones in humans, both male and female came into light. The popular points being the genitals followed by the lips, ears, inner thighs, and the shoulder blades.

Not much of a difference was advocated in the areas for both the sexes except the fact that men have more affinity for the backs of the legs and the hands, while women are not impressed to that level. And what comes out is men’s hands sexy enough! Bummer!!

According to Professor Oliver Turnbull of Bangor University’s School of Psychology, “We have discovered from this that we all share the same erogenous zones in at least two very different continents, whether we are a white, middle-aged woman sitting in a London office, or a gay man living in a village in Africa.” Turnbull went on to state, “It suggests it is hard-wired; built in, not based on cultural or life experiences.”

Researchers also opines that the according to the findings on erogenous zones, our sense of touch and our sexual response is controlled by the different parts of the brain.

Also Turnbull holds the opinion that the feet are an erogenous zone due to positioning of various body parts in relation to the genitals. He further noted that the Cosmopolitan magazines of the world have been running half-baked surveys on this for years, “But we wanted to look at the question of why the side of the neck is interesting if nibbled, but not the forehead or head, when both have the same sensory receptors.”

The findings that support Turnbull’s theories also suggest that the cerebral cortex is responsible for sexual response. He seems to be in the comfort zone upon pointing out the ethical difficulties that arises from taking the next step and trying to measure the same. It meant that someone probably needs to be stroking someone else while the brain was being monitored. Well, the United States in is case will have more volunteers for the research.

In conclusion, the feet end up at the very bottom on the list of erogenous zones. The place where it literally is.

Des: Men and women were thought to have separate human erogenous zones for both of them. But, according to a recent revealing, they have almost the same number of erogenous zones.