Bollywood’s favorite baba has the same legend as the Mata at Vaishno Devi. Thus I too, got it sometime last month when I made the visit to Pushkar from Jaipur. The drive to Ajmer is effortless with the entire expensive toll road. Starting from Jaipur, I did the hundred kilometre drive in 2.5 hours, almost non-stop. 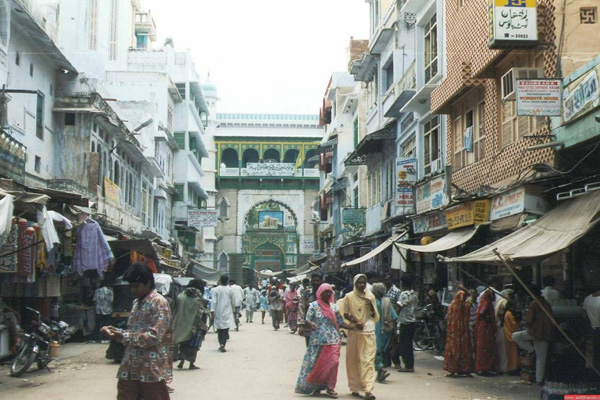 While entering the narrow alleys leading to the Dargah, I was utterly surprised at the width of the roads. It was like as if someone was trying its best to squeeze the whole of the universe into a narrow street. If you are on your own car, you will notice the parking signs on the left. It cost me hundred bucks for around two and a half hours of parking. 10 minutes late, well you will have to pay fine.

After the parking was set, then began the long journey. Hotels are abundant on the way but you do not find a decent one with clean sanitation. From my experience, I would suggest you to empty your tanks before you enter the town. The street matches Meena Bazaar and the stuffs will not attract you much either. Just keep on walking straight until you reach the flower shops on the left. 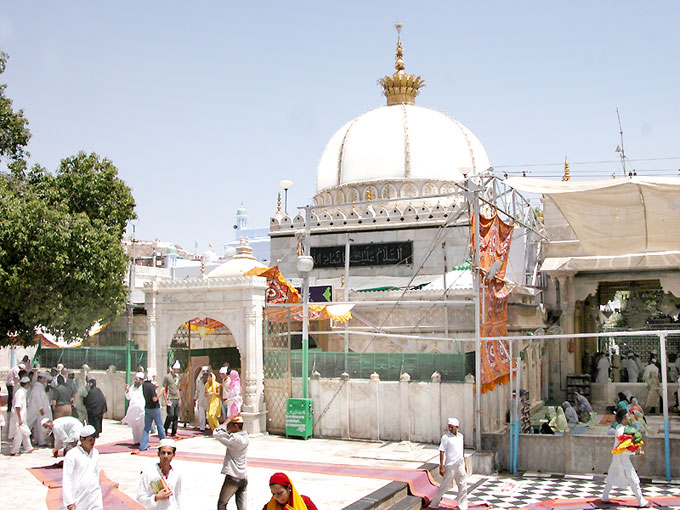 A quick guide of caution! Even if you are very thirsty, do not even consider the sugarcane juice shops. All you will get there is some strange watered down flavored concoction, alien to the real world hygiene.

I bought some flowers for both myself and my relatives to offer. The price of the flower basket you buy has nothing to do with the amount of dedication you have. Therefore, do not be intimidated by the sellers. Buy whatever you want, settle your shoes and prepare for the darshan. 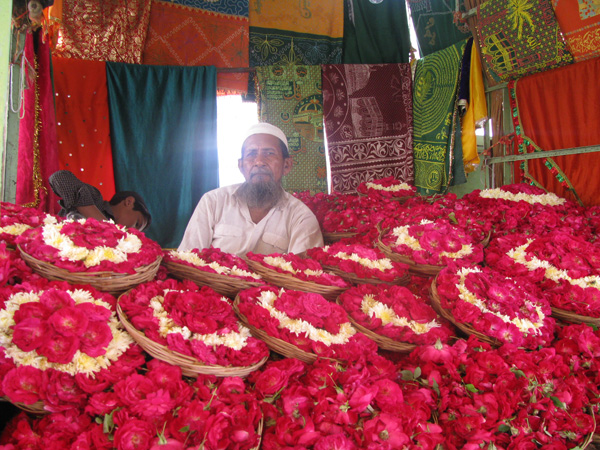 The sight at the darshan is mesmerizing. Here you will get an answer as to why hard coded Muslims find the idea of a dargah so appalling. It resembles a temple. However, at the sight you will see a mixture of Hindus and Muslims devotees alike, all pleading to Baba with their appeal.

There were no formal prayers, no specific methods or rituals. I could also spot a few chalisas of the Hindus lying there. There was no order. People were allowed to take photos which are generally forbidden in other religious places.

Though Namaz was offered at the mosque in the backside, but no one really cared as they were free to do what ever they wanted. You will always find a long queue outside the inner sanctum and on weekend and Fridays you need to wait a maximum of ten minutes to enter the dargah.

On my visit to the dargah I could relate it so much to a temple. Outside the dargah, on both sides were holy people who are busy doing sweet nothings for money. Once you enter the dargah, the exit door is at the back. Yet another reminder, once you enter you will be hounded for donations by the dargah officials on the left. On the right, pressed against the walls you will find numerous people, crying. You will be set aback by the shrill contrast of devotion and donation at the same place.

I did my prayers, completed my darshan and also went around the dargah and threw money into the deghs. And thus my visit came to a halt. The 2.5 hours journey met its climax in merely less than an hour.

Devotees were still settled very much where they were when I entered. But, since, it was getting dark, I had to leave. I wrapped up my prayer and finally drove back to Jaipur.