Now this is interesting! The next time you watch the news on CNN, the Facebook comments you see may be your own too. CNN, NBC’s Today Show, Slate, Buzzfeed and BSkyB were all granted access to Facebook’s Public Feed API and the Keyword Insights API.

The Public Feed API will allow the news outlet to check and presumably air all public Facebook posts related to a keyword. The Keyword Insights API will take all of those mentions, likes and shares and return the totals according to the day, location, gender, age, etc. For instance, if 19 million people mentioned about an UFO over Kentucky understand that 10 million were men over 35 and half were located outside of the US. 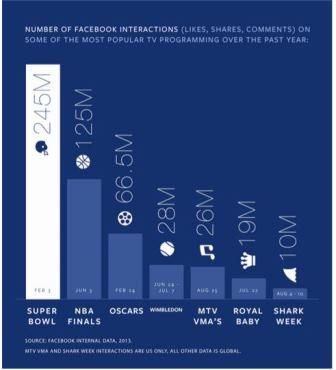 This will be a huge potential data pool that could be used to gauge the country’s interest in everything, be it from the latest movie to a candidate for presidentship.

But the keyword data is a no-brainer. It is actually a collection of anonymous numbers, so privacy won’t be an issue. The Public Feed is another story. Public or not, Norm Al Man from Michigan might not want the entire country to know that he enjoyed Miley Cyrus’ performance at the VMA’s.

Well, we all could have found that post using a hash tag search. And we could have embedded that post on our news sites and blogs. All thanks to the new sharing tools! But don’t you thing airing comments on national TV feels like a big leap? Maybe because Facebook feels more “personal” now.

Coming to Twitter, TV shows and newsrooms have been using Twitter Tweets as content for a while now. You must have seen tons of Tweets popping up on the news during a major event like a natural disaster. It is common sense that connecting with people through social media will allow them to cover more ground faster than they can with their own boots on the ground.

Twitter is an integral part of several current TV shows. Syfy’s Face-Off collects Tweets during the first run of the episode then in the next hour, runs a “tweet-peat” — a repeat of the episode with an overlay of the best Tweets. I guess you have understood the potentiality of twitter by now!

The CW’s America’s Next Top Model also uses social media scores to help decide the winners and losers each week. They have also been reading out social media posts during judging and allow fans to comment via webcam.

Yes! It did work for Twitter, but will it work for Facebook too? Or will people see this as an invasion of privacy and cry foul? What are your comments? Will you be okay with CNN scooping your posts to annotate news?