In a quarterly mobile tracker report released by IDC, it was brought to notice that phablets (smartphones with display size more than 5-inch and less than 7-inch) is emerging as the fastest growing smartphone segment in the Indian market. The percentage grew 17 times and now it has taken 30 per cent of the Indian smartphone market in Q2, 2013. 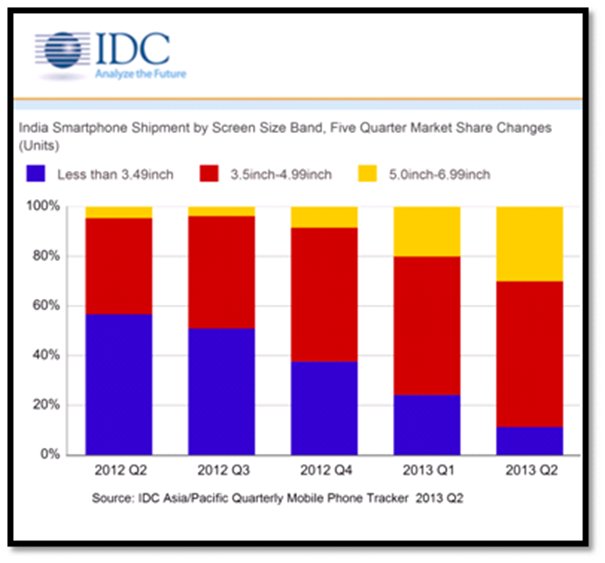 As per IDC, the smartphone market in the country has increased to 21 per cent year-on-year and the quarter over quarter growth was a modest 4 per cent.

Manasi Yadav, Senior Market Analyst with IDC India opines that, “The growth in the India smartphone market is driven by consistent performance by local vendors who accounted for more than half of the total smartphone market in 2Q13. These vendors have been scaling up operations owing to rising migration of the user base from feature phones to smartphones.”

When it comes to vendors, Samsung still maintains its top position in the smartphone market with 26 per cent of the total with Micromax giving tough competition at 22 pc of the market share, followed by Karbonn with 13 per cent share. IDC observes that dual-SIM smartphones with entry-level pricing are the key driver of growth for the smartphone market in the country.

“The key for growth in this market, as with most emerging markets, is a low-priced phone equipped with a large screen and dual SIM slots,” said Kiranjeet Kaur, Senior Market Analyst with IDC’s Client Devices group. Manasi further adds “The dual SIM phenomena, which had accelerated the growth of local vendors in feature phone, turned to dual SIM smartphones flooding the Indian market. Topped with an attractive sub-US$200 price tag, these smartphones are highly attractive.”